Solemother began in Urmston, Greater Manchester. From three founding members, it’s grown to a community of over 1,300 people worldwide. The group encourage, motivate and inspire each other to find ways to become more physically active and boost their mental wellbeing within their daily lives.

Solemother is an initiative that almost began accidently. Founder Grace Lees was looking for a way to fit exercise, and time for herself, into her busy lifestyle. ‘After having children, I viewed life differently,’ says Grace. ‘I wanted to be as fit and healthy as I could, but when my husband broke his leg and ankle I found myself stuck at home unable to get out to classes. Looking after my husband and two small children, with no time for myself, wasn’t great for my mental wellbeing.’

Grace was chatting amongst other mums at a children’s party when the idea for Solemother started. With gym classes often running at her children’s bath and bedtime, Grace mentioned she’d be keen to go out for a run later in the evening. ‘I didn’t like the idea of running alone at night,’ Grace says. ‘But I asked two other mums to join me and, with that, Solemother was born.’

Solemother encourages both physical and mental wellbeing through a fun, sociable community. The group use Facebook to start a poll to set a time, location and (if applicable) running distance, and invite others to join. The group encourages women to stay safe. Whilst some members enjoy running solo, they always advise that no one runs alone between dusk and dawn and that, if you can’t make a meet-up, you let the organiser know so no-one gets left behind. ‘You can go out anytime, with anyone!’ smiles Grace. ‘It’s amazing the friendships I’ve made running with people I’d never met before.’

After a workout, Solemother asks members to share their post-workout selfies to receive words of support. Rather than bragging about success, the selfies are a badge of honour: each celebrated equally for everyone on their own individual active journey.

Solemother’s Facebook group is a safe space and sounding board, which gives members chance to discuss their mental health challenges as well as to celebrate their active success in a supportive network.  ‘We ban negative language’, says Grace. ‘Don’t say you’ve ‘only’ done a walk (in fact, we had a member who started walking and ran the Greater Manchester Marathon last year). You’ve gone out and achieved it, so celebrate that! It’s all part of the positive shift towards a healthy body and mind.’

Though the largest groups remain in Greater Manchester, the community’s spread as far as Australia. ‘Helen posts in the group daily from Australia, citing the inspiration and motivation she gets from the group’ says Grace. ‘We also have a member in Kent, who came to run the Greater Manchester marathon last year. Our cheer squad went crazy when they spotted her out of the thousands of runners! There’s a real sense of belonging in the group, no matter where you are.’

Grace is keen to address the misconception that Solemother is a running group. Rather, it’s about getting out there and being active, in whichever way you choose, as part of a community. They encourage active family events, with emphasis on activities that are free of charge, as well as any kind of sporting activity that the community would like to try out, from cycling to aerobics.

The focus of Solemother is being active in your way: it doesn’t matter how, or why, or how often, as long as it’s good for your physical and mental health. ‘We support one another, embrace successes and share our stories,’ says Grace. ‘Whether you’re tackling your first ever hike or training for a marathon, our group is a sisterhood full of inspiring stories. We’ve had members who’ve experienced unbearable grief, are recovering from cancer or have simply lost all their confidence. Together, we do all we can to support them.’

‘Solemother has grown into something I could never have imagined,’ Grace continues. ‘When we support each other, incredible things happen. This sense of belonging, which seems quite unique in a non-competitive active network, is what makes Solemother something of which I’m so incredibly proud.’​

Find out more about Solemother on their website, here. 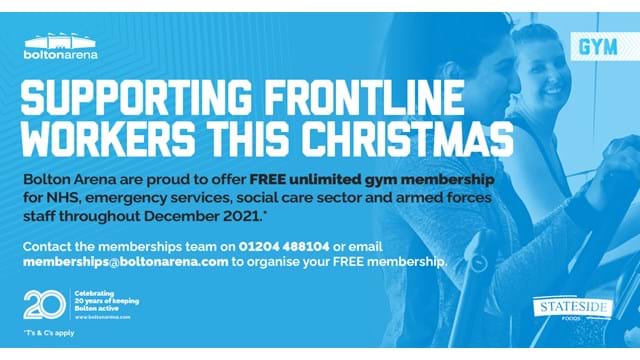 Frontliners unlimited gym use throughout December at Bolton Arena

Building the movement, meeting people where they're at and being the change are the primary focuses for us over the three years to April 2025.