There is an estimated population of 215,000 lesbian, gay, bisexual and trans (LGBT) people in Greater Manchester (GM) according to the LGBT Foundation - a population larger in size than the whole of Rochdale.

Due to small sample sizes, there’s no LGBTQ+ data on activity levels available at a Greater Manchester level. From the most Active Lives (November 2019-20) we know that the national inactivity rate is 27.1% but this varies significantly across groups. Those who identify as 'Other' gender are more likely to be inactive than those who identify as male or female, in fact four in ten are inactive (40.6%). 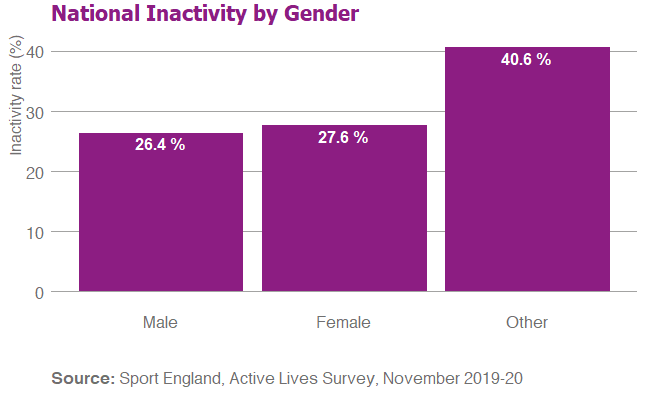 When exploring the data by sexual orientation those identifying as gay or lesbian have the lowest inactivity rates (21.5%), however, there are disparities between the activity levels of people who gay versus those who are lesbians – with gay men less likely to be active than lesbian women.

It’s been shown that there are differences between LGBTQ+ men and women, and that general health outcomes for LGBTQ+ people are consistently lower than the average across the population. Physical activity may play a role in improving the mental and physical health of the LGBTQ+ population.

The evidence that LGBTQ+ people have disproportionately worse health outcomes and experiences of healthcare is both compelling and consistent. With almost every measure we look at LGBTQ+ communities fare worse than others. For example, research from Stonewall (2018) found that half of LGBT people (52 per cent) said they’ve experienced depression in the last year.