A number of inactivity inequality gaps exist and whilst they may have narrowed, to varying degrees, across Greater Manchester (GM) we can still see clear gender, age, disability, socio-economic status and ethnicity gaps. Many of these factors overlap and further compound the differences.

In the latest Active Lives release the inactivity disability gap in GM is 21.4% which is larger than the England gap of 19.3%, the gap is also closing at a slower rate than across England as a whole. In GM the inactivity disability gap has shrunk by 1.3% since baseline (November 2015/16) whereas nationally it has shrunk by more than twice this (3.0%). Across GM there are noticeable differences between the ten boroughs with the gap varying from 11.0% in Stockport to 28.6% in Wigan and overall five of the boroughs have a wider inactivity gap than England. 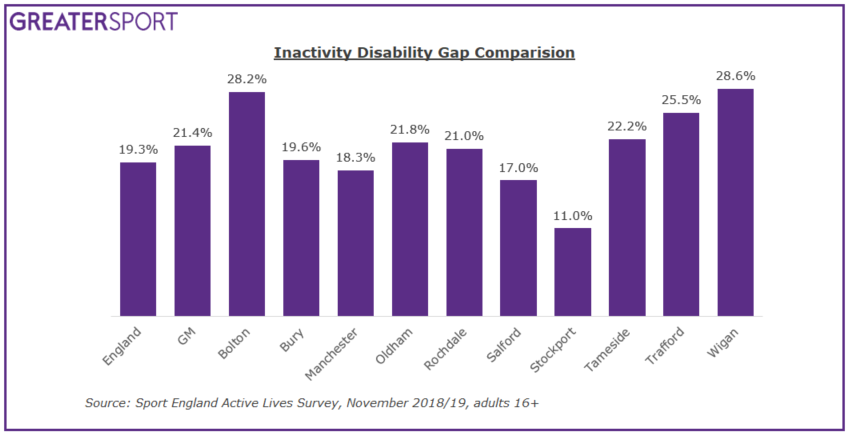 Furthermore when inactivity is broken down, it is clear that amongst all groups the majority of people who are classified as inactive are doing no physical activity (rather than anything up to 30 minutes). This figure is particularly high amongst those with three or more impairments where eight in ten of those classified as inactive, do nothing (see graph below). 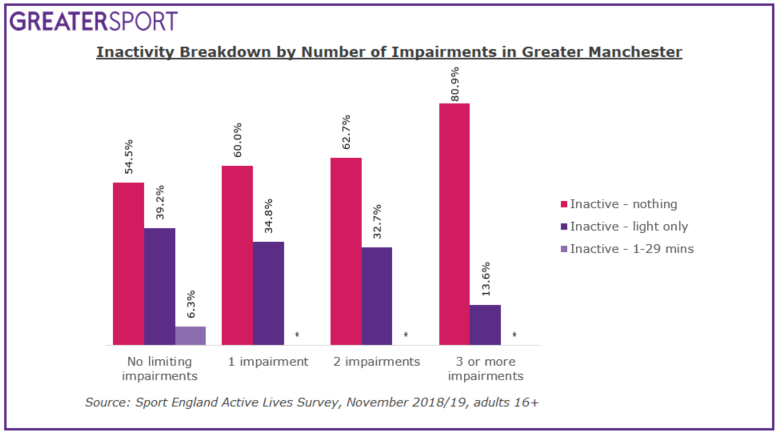 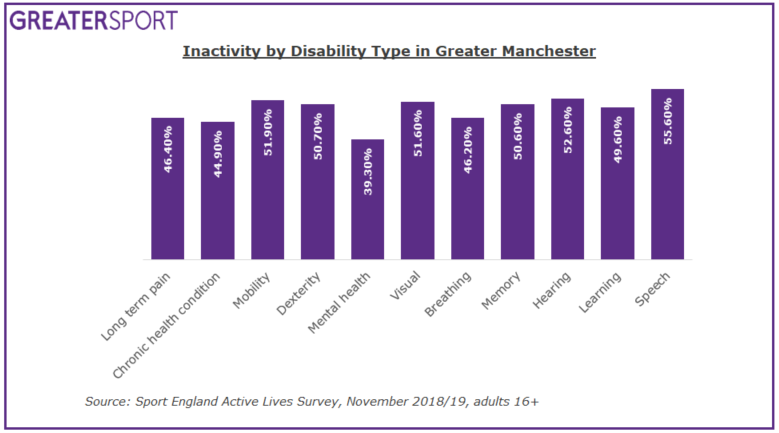 Disability and other factors

It is important to note that disability amplifies the gender gap, the gender inactivity gap overall in GM is 2.5% with women more likely to be inactive. Amongst those with disabilities the inactivity gender gap is 4.1%, 40.8% of men with a disability are inactive compared to 44.9% of women with a disability. When the disability–gender relationship is broken down by number of impairments the highest levels of inactivity are amongst men with three or more impairments (48.6%), followed by women with three or more impairments (48.3%). The starkest difference is amongst those with two impairments with females having an inactivity rate almost 50% higher than males (46.4% v. 31.7%).

Activity Alliance offer further information on the experiences of people with disabilities and long term health conditions and how to engage them in physical activity.

More information on the latest Active Lives release can be found here. Find out more about the relationship between disability, long term health conditions and physical activity here.